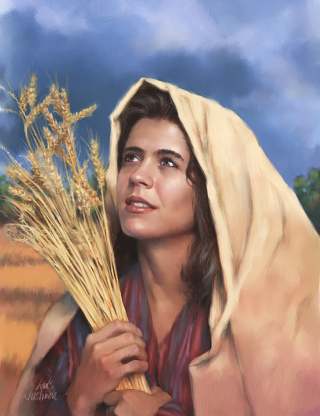 The book of Ruth is a mere four chapters but it bears within it such a model of the kinsman redeemer to which we are privileged through Jesus. But let’s begin at the beginning. It’s a story of a family who had to leave their home because of a famine. The head of the family was Elimelech, who was married to Naomi, with whom he had two sons, Mahlon and Chilion. They left their home in Bethlehem and journeyed to Moab. After Elimelech’s death, the sons took wives of the Moabite women – Orpah and Ruth. The sons also died after about ten years and the women were left with their mother in law, Naomi. Following their loss, Naomi decided to return to their home in Judah because she’d heard food was now available. She prepared to make her good byes with Orpah and Ruth, sending them back to their father’s households. They wanted to stay with her, but she insisted they return. After all, it wasn’t as if she’d have more sons for them to marry. They would have to fend for themselves as single women which wasn’t a desirable state in those day. So Orpah took her leave and returned.
But not Ruth.
She stood her ground and pledged herself to Naomi. To go wherever she chose to go. To live where she lived. To be in covenant with Naomi’s people and with Naomi’s God. To die where Naomi died and to be buried In the same place. This scripture is often used at weddings but it really was the vow of a daughter-in-law to her mother-in-law. So they returned, together, to Bethlehem, just in time for harvest.
When Ruth decided to work, she went out to glean among the sheaves. The rule of the field was to leave sheaves around the edges of the field so strangers and those who were hungry were free to gather as much as they could for their own survival. Ruth ended up in a field owned by Boaz, a relative of her late father-in-law, Elimelech. Boaz actually came out to meet and greet the harvesters. “God be with you,” he cried. “And God bless you,” they responded.
When he asked his foreman about the identity of the young woman he hadn’t seen before, he found her to be related to Naomi. So he told her she could glean exclusively In his field; and that she should stay close to his young women and harvest where they harvest. He had cleared the way for her so no one would bother her.
When she asked why he extended such kindness to her, he said he’d heard about the same kindness she’d extended to Naomi, and his prayer was that God would reward her. But he would also do his part. He ordered his harvesters to leave extra grain on the ground for her to make it easy for her to have her fill. By the end of the day she had nearly a full sack of barley.
When Naomi found out who owned the land from which Ruth had gleaned, she told her this Boaz was a kinsman redeemer, a near relative of theirs.
One day Naomi told Ruth to get dressed up and go to the threshing floor. “When you see him slipping off to sleep, watch where he lies down…lie at his feet to let him know you are available to him for marriage…he’ll tell you what to do.” {3:3-4}
Boaz was quite pleased when he discovered Ruth in the middle of the night, and she expressed her desire for him to marry her. He let her know there was another relative who had the right and might want to claim her. He would check to be sure the way was clear for them. Boaz gathered 10 of the town elders to discuss the matter when he encountered the relative he’d referenced earlier with Ruth. He offered him first refusal on property owned by Naomi and mentioned, almost in passing, after the relative consented to the purchase, that Ruth the Moabite was part of the deal. To this the relative relented. He gave Boaz his shoe, which was how people sealed a deal in that day. Boaz made a public declaration of the deal and enlisted their witness. It’s important to note that Boaz took Ruth as his wife but make a vow to keep the name of her deceased husband, Mahlon, alive. The children they had would be born in memory of and bear the name of Mahlon. They did conceive a son, Obed, who the community called “Naomi’s baby boy.” Obed was the father of Jesse and Jesse was the father of David. And if you follow the whole lineage of Mahlon, through Boaz and Ruth, you’ll find the name of Jacob, who had Joseph, Mary’s husband. The Mary who gave birth to Jesus, the Jesus who was called Christ. {Matthew 1:16 The Message}